Stay Informed With Your Community 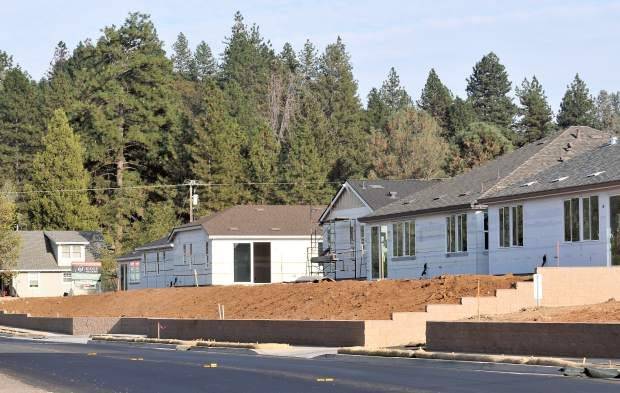 Now: Many of the homes under construction in a neighborhood being built along Ridge Road in Grass Valley have already been sold.

Jon Reshatoff finally decided he had had enough.

Currently a renter, the father of three was hoping to find a house with at least two bathrooms, that didn’t need any major renovations, in his price range.

Reshatoff, the operations manager at Ernie’s Van & Storage in Grass Valley, was working with real estate agent Greg Sharp at Coldwell Banker but just couldn’t find a house to fit a mortgage he could afford.

“This county is driving out the middle class. They can’t afford to live here.”

Reshatoff is one of many who have learned how a low inventory of real estate options on the western Nevada County market has impacted prices in recent years.

Reshatoff looked at Lake Wildwood, but concluded he couldn’t afford a home there priced in the mid-$200,000 range with homeowner association fees on top of that. And rural areas are overpriced, he said, because cash buyers are coming in looking for property on which to grow marijuana.

Even fixer-uppers are unavailable, or should be more accurately described as teardowns, he said.

Like other local buyers in a nearly nonexistent price range under $300,000, Reshatoff found himself competing with multiple offers and houses that sold in hours.

“I would see something I liked and by the time I called to make an appointment, it would be under contract,” he said.

To be a competitive buyer, Reshatoff said, he would have to take time off work to chase down every lead — and have cash rather than a loan.

“This county is driving out the middle class,” he said. “They can’t afford to live here.”

Like other frustrated buyers in this extreme seller’s market, Reshatoff said he ultimately decided to “ride it out” and wait for prices to drop.

PRICES HIGH, BUT NOT YET NEAR PEAK

“We started seeing a recovery in about 2012,” said Coldwell Banker Grass Roots Realty Broker Diann Patton. “It’s not that people regained all their equity. We’re still about 20 percent below the peak of the market in 2005-06, but we’re finally getting close to that height.”

The boom of more than a decade ago falsely elevated the market, Patton said. And that unsustainable growth affected Nevada County’s economy negatively.

“The number of sales and the values could not be sustained compared to buyers’ income levels,” said Patton’s sales manager, Cary Sanders.

Patton said her personal “a-ha” moment came with a couple who wanted to buy a house that was $100,000 more than they could afford, using an adjustable rate mortgage. She was unable to persuade them that gambling on having a higher income by the time their mortgage adjusted upwards was a bad idea, she said.

But, local realtors say, unlike that artificially inflated market, there likely will be no corresponding freefall this time around, as when the median sales price dropped to $210,000 in 2011.

There are no more unwise lending practices driving a boom, Sanders said, adding, “The demand is legitimate — the buyers are credit-worthy.”

WHAT’S BEHIND THE INVENTORY SHORTAGE

The last two years have been a seller’s market, partially driven by low inventory. Sanders believes that if the supply can be increased, appreciation will level off.

The demand for listings is the highest many real estate agents have seen in 15 years, Patton said.

“We used to have 1,000 houses on the market,” she said. “We are at one-third of the supply we would have in a normal market.”

There are several reasons for the extremely low inventory.

For one, baby boomers are not downsizing, unlike earlier generations. Where most homeowners used to stay in their house five to seven years, that number now is 10 to 12 years, Sanders said.

“They are staying in their homes longer,” Patton said. “They’re doing well and see no reason to downsize, so they’re tying up that market.”

Instead of selling and downsizing, many homeowners are opting to give up space in their houses, either to rent or to move in aging parents or “boomerang” adult children.

“It does stall the move-up market,” Patton said.

Another factor that continues to drive appreciation is Nevada County remains a destination, with Bay Area buyers are willing to pay more.

“We are seeing more people buying to retire into eventually,” Patton said, adding that some opt to hold onto it as a weekend getaway or turn the vacant home into a vacation rental.

“Bay Area buyers come here and see they can buy a 3,000-square-foot home for $600,000, where that same house in Danville would be upwards of a million,” she said. “That does affect our values.”

The lack of new-home construction is a huge issue, area realtors say.

“It’s one of our biggest problems — we don’t have new homes to show buyers,” Patton said. “They’re telling us they want a new home but we just don’t have that here. … If we build it, they will buy.”

Of course, those real estate agents acknowledge, new homes are not affordable for entry-level buyers, with those coming online this year and next priced above $400,000.

At Ridge Meadows in Grass Valley, for example, new homes are priced starting at $405,500 for a 1,730-square-foot house with no choice in fixture upgrades, Homes by Towne representative Christine Fore said.

“We’re not marketing to entry-level buyers,” she said, noting that at Cascade Crossing in South County, which just had its final escrow close this year, the buyers were primarily families relocating to the area or retirees.

New construction is not affordable for entry-level buyers, agreed Gold Country Ranches’ Teresa Dietrich, currently the president-elect of the Nevada County Board of Realtors.

When she built her own home, she said, she was charged $15,000 by the county in permit fees for a 1,650-square-foot home with a three-car garage. Apply that math to a development and you can see why pricing is so high, she said.

“If you’re a big builder and you have to factor in staff and other overhead, it really does price (them) out of entry-level housing,” Dietrich said.

In Dietrich’s view, the county’s building department could do a lot more to streamline the process and make it more affordable to build, so that more people could access entry-level housing.

WITH INVENTORY SO LIMITED AND STARTER HOMES PRICED AT $350,000 — WHAT OPTIONS ARE THERE FOR BUYERS LIKE RESHATOFF?

According to Dietrich, there are multiple employees at Sierra Nevada Memorial Hospital who can’t find or afford housing in Nevada County and commute every day.

“It’s a big problem,” she said. “Where do people live? … Workforce housing has to be the focus. The houses being built are not really affordable.”

Along with simplifying and accelerating the process for building new homes, Dietrich said, the county and cities should be looking to develop assistance programs for entry-level buyers.

“It’s the great American dream,” she said. “We have to get that process rolling.”

Sanders doesn’t see much relief in the near future, saying, “I don’t see anything changing drastically in the next year.”

Sharp, who assisted Reshatoff in his home search, sees some “leveling off” of the market with daily price reductions, but no decline.

“Sellers were pushing too hard,” he said. “Prices are getting more reasonable.”

And that is pushing some increased sales, with 399 active listings Thursday morning, down from 424 a few weeks ago.

The bad news is, even if the market is softening, prices aren’t going down substantially, he said.

“The bottom line is, I don’t see prices declining, although areas like Lake Wildwood and Alta Sierra are leveling off,” Sharp said. “Anything under $300,000, we’re still seeing multiple offers.”